Hosts and spinoff characters in the kids' game show Raven.

Warning: All spoilers are unmarked! Proceed with caution. 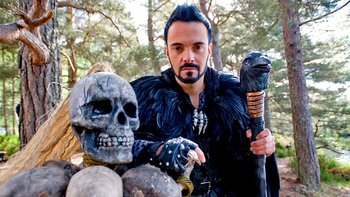 The original host of the show. A warlord who is a strict but fair guide to the warriors. As of Series 11, he is trapped in a desolate realm, having been sent there by the same magic that banished Nevar. He can however be summoned by the current Raven whenever the latter is in need of guidance. 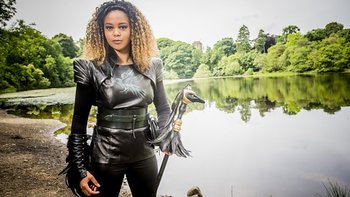 The current host of the show and a former champion of the original Raven. She is less strict than her predecessor but still emphasizes how dangerous the challenges are.

The Big Bad of the show, he is always trying to stop the warriors from succeeding in their quests and occasionally seeks more power than he already has in the spinoffs. He was banished to a desolate realm during the Time Skip between Series 10 and Series 11 but still controls his demons and is attempting to escape.

Nevar's minions who will do everything in their power to stop the warriors from succeeding on their quests.
Advertisement:
Spinoff Characters

An astronomer and Raven of Old's mentor.

A being fashioned from the Earth itself.

A former soldier of Nevar who claims to have turned over a new leaf.

Past warriors who attempted to gain the Dragon's Eye and failed, leaving them corrupted.