Video Game / Realms of the Haunting 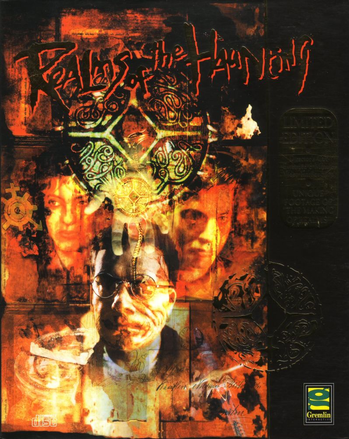 Realms of the Haunting is a British adventure game, played from the first-person perspective, released in 1997 by Gremlin Interactive. The 3D engine used in this game was borrowed from Gremlin's own Normality. The game combines point-and-click adventure game elements with first-person shooter action and exploration.
Advertisement:

Adam Randall ventures to a haunted house in order to investigate the mysterious circumstances around his father's death. As he enters, however, the doors locks behind him and he is forced to journey throughout the entire house while looking for answers as well as means of escaping it. Along the way he meets up with the psychic woman Rebecca Trevisard who provides Adam with guidance as they work together in trying to escape. Adam soon discovers the house contains portals to several different universes, and that he is the Chosen One who must prevent the final apocalypic battle between the forces of good and evil.

The game has over 40 hours of content and includes many different universes to travel, and has a plot which involves multiple sides fighting for their own causes. The beginning gives the idea of Adam being against demonic forces, but later on player finds himself caught in much deeper plot between different forces, where demons play only one role.

The original British version of the game (which lacks selectable difficulty) is available on GOG.com and Steam.