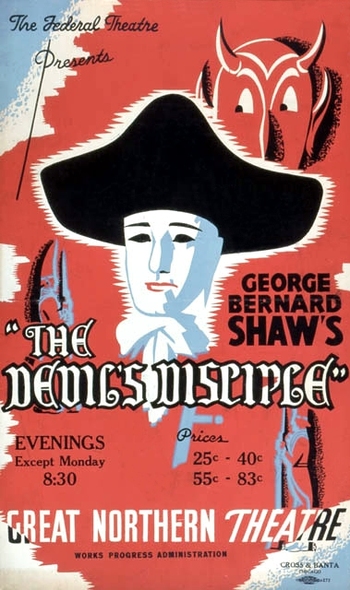 A comic play written by George Bernard Shaw in 1897 and set during The American Revolution, The Devil's Disciple tells of the title character, Richard Dudgeon, and his opposite, the Rev. Anthony Anderson, and the events which follow when British soldiers come to arrest Anderson for treason and Dudgeon takes his place. A further element is how Anderson's wife, Judith, rapidly goes from loathing Dudgeon to falling in love with him.

Adapted to the screen several times; most notably as a 1959 film, directed by Guy Hamilton and starring Kirk Douglas as Richard Dudgeon, Burt Lancaster as Anthony Anderson, Laurence Olivier as General John Burgoyne, and Janette Scott as Judith.

The Devil's Disciple provides examples of: