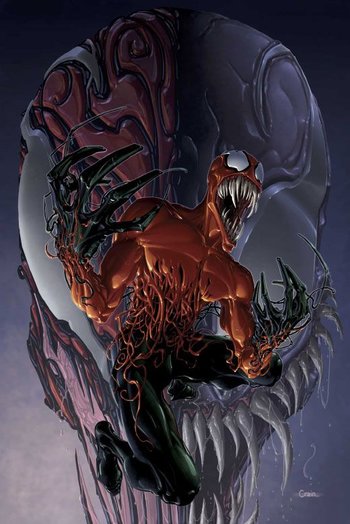 Toxin was a Marvel Comics miniseries written by Peter Milligan, spinning out of the events of New Avengers.

The "child" of Carnage, Toxin is a symbiote bonded to NYPD officer Patrick Mulligan, who hopes to teach the still young creature right from wrong by taking down escaped supervillains, and thus prevent the symbiote from turning out like his father. While characterization varies from writer to writer, and indeed host to host, generally Toxin is cast in a more noble light than other symbiotes. While he has a dark sense of humor and can be just as brutal as any of his kin, Toxin is also portrayed as childish, curious, and playful, ultimately coming down firmly on the side of justice rather than the fine line walked by his grandfather, the self-styled "Lethal Protector".

Following the conclusion of the character's miniseries, Patrick Mulligan was Killed Offscreen by Blackheart, who took the symbiote for himself. The Toxin symbiote eventually wound up being bonded to Eddie Brock in Rick Remender and Cullen Bunn's Venom. This carried through into Gerry Conway's Carnage (2016), when Eddie gave the Toxin symbiote to South African teenager Jubulile van Scotter, who sacrificed it to halt a Darkhold invasion.

When the creator of the symbiotes, the cosmic horror known as Knull, arrived at Earth to conquer the planet, he discovered Toxin had survived his ordeal, barely. However, the King in Black believed it to be too weak to be of any use and thus did nothing to restore it. Remarkably, it was eventually able to limp to a young boy named Bren Waters, who became his newest host, regaining much of his original characterization in the process.