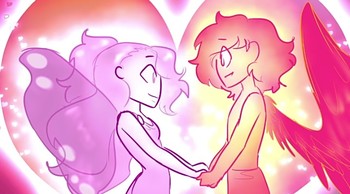 Classics Summarized
Modern Classics Summarized
Trope Talks
OS Plays
Other
In Blue's "Finals Survival Guide", at one point Blue is curled up on the floor surrounded by notes, clearly stressing out. Then one of his friends comes into frame and proceeds to wrap him in a blanket and give him a cup of hot cocoa. She leaves frame for a quick minute, then returns to give him a hug. Aww!