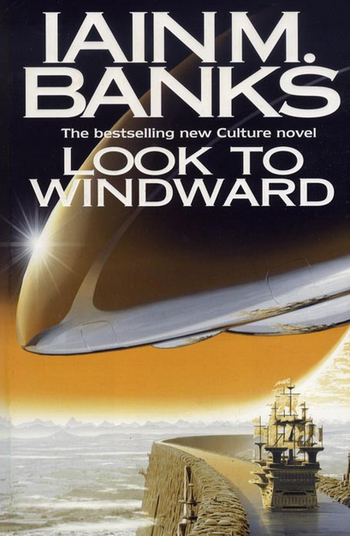 Look To Windward is the seventh Culture novel by Iain M. Banks. It is based around Masaq', a vast Culture orbital home to billions of people, and a secret plot involving it.
Advertisement:

A short time before the events of the book, the Culture secretely interfered with the societal development of the Chelgrians, a five-legged predatorial race, with the aim of dismantling their repressive caste system. Unlike in most cases of Cultural intervention, this went catastrophically wrong and caused the Chelgrians to descend into a bloody civil war. Major Quilan IV lost his wife in the conflict, and consequently any will to live. He is provided with the "soul" (the electronically stored memories and personality) of an old general, dead about 80 years previously. To prevent jeopardizing the plan in case Quilan's mind is scanned by an AI, the living Chelgrian has his memory wiped, and while the soul knows the exact nature of the mission, the living one only regains his memories slowly, until the truth of what he accepted to do reveals to him entirely.

Look to Windward provides examples of the following tropes: