These are the characters from The Big O. 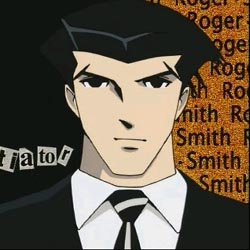 The top negotiator in Paradigm City and The Hero of the story. A Batman analogue, he's committed to the well-being of the citizens of Paradigm, especially children and the elderly. He controls the Megadeus he calls Big O, though he's not sure why he has this power. In fact, he never seems to dwell much at all on his own youth, or how he came to possess so many amazing capabilities... 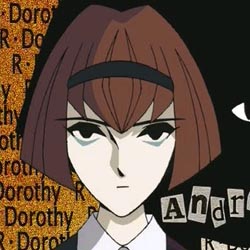 This young lady happens to be an android, who ends up as Roger's live-in maid after negotiations to rescue her from kidnappers results in the death of her creators. Built from a pre-Event design, her sophistication rivals that of the other androids seen around the city, and she carries the distinction of being the only one capable of passing for a human under casual inspection. That is, until the final episodes reveal at least one other character was an android all along as well. 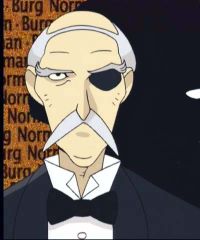 Norman is Roger's butler. Though he's a faithful domestic servant in his daily routine, he's also a skilled and fearless fighter, and has been maintaining the Big O since the Event forty years ago. Apparently when the Big O accepted Roger as a worthy master, Norman did the same. 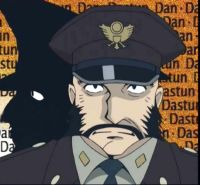 The Head of Paradigm City's Military Police, and formerly Roger's commanding officer. Technically his allegiance lies with the Paradigm Corporation, but his true loyalties are to the genuine welfare of the city and its people. Unlike Roger, he's (mostly) willing to put up with Paradigm's corporate string-pulling in order to keep serving the public trust. 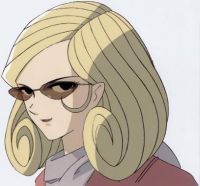 This lovely blonde has at least one hidden agenda, with very vague loyalties on top of that. She has a nose for trouble, which usually means she's always one step ahead of Roger. Oddly appropriate to her name, she has a pair of scars on her back — at about the place an angel's wings are usually shown sprouting from (seen in Act 7). 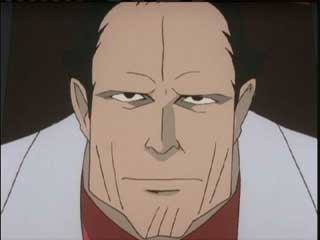 The man in charge of Paradigm City and the corporation that owns it, controlling them both with ruthless efficiency. He's willing to preserve the state at the cost of its people when necessary, has no qualms about dealing with people he knows can't be trusted, and genuinely believes that anything would be better if he was in control of it. 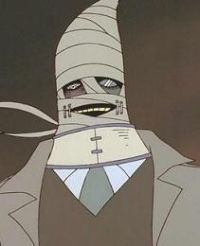 Formerly Michael Seabach, reporter. His search for the truth of Paradigm City led him into its darkest secrets, where he witnessed... something... and became unhinged, to say the least. Upon his return, he begins a one-man crusade against the lies and complacency of Paradigm, and cares little for what he destroys along the way. 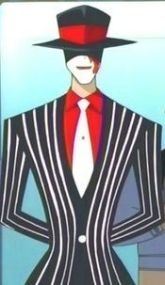 All we know about Alan is that he works for Rosewater (among possibly others), he's some kind of cyborg (which were previously unknown in Paradigm City) — and that he's very dangerous. 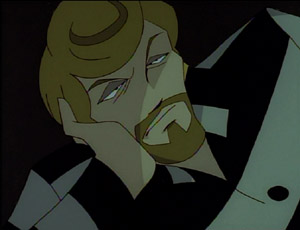 This criminal has the distinction of being Roger Smith's first foe introduced in the series. Like any good criminal, he just wants to get rich at the expense of others... but unlike good criminals, he's equally concerned with looking as good as possible while doing it. Might be more than he seems, if the pre-Event memories he gets after being hit by lightning are any indication. 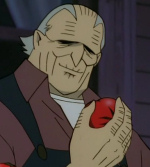 Alex Rosewater's father, a kindly old man who has given up the cosmopolitan life to lead a simple life of farming.
Vera 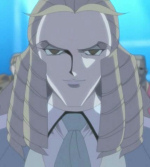 A foreign woman who appears in the second season as a commander of the forces of the Union. Her French accent and claim to be from a country across the sea suggests there's civilizations in the world other than Paradigm City, but there's no memories to be had out there. 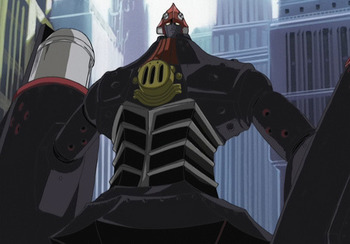 The titular mecha. A black Megadeus piloted by Roger Smith, which is possibly sentient.

Megadeus is the name given to the robots in the series “The Big O”. Not much is known about how they are created, why they are created, or even what their original purpose is. The name “Megadeus” is primarily used when referencing the three main megadai a.k.a. "bigs" (Big O, Big Duo, Big Fau). Those who are able to successfully pilot the megadai are typically considered to be a “dominus”.

Seen in “Roger the Negotiator” and “Dorothy Dorothy”.

Seen in “Bring Back My Ghost”.

Seen in “A Legacy of Amadeus”.

Seen in “The Call from the Past”.

First seen in "Enemy Is Another Big". First appearance as Big Duo Inferno in "The Big Fight"