Literature / Put the Sepia On 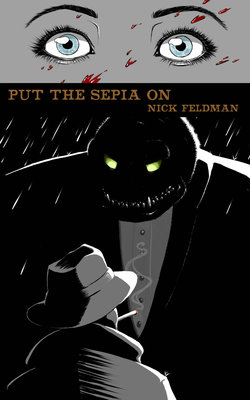 Oh, yeah, this looks like a happy book.
Advertisement:

Put the Sepia On is a Hardboiled Detective novella by Nick Feldman set in a dystopian Crapsack World and narrated by Private Eye Monologue. Apart from the nameless detective, there's a pair of femme fatales, a monstrous Friendly Enemy, and a sniveling Dirty Coward. The plot is initially straightforward, as the detective is hired by a beautiful young woman called Coral to find her missing brother, but things pretty quickly spiral out of control and the detective quickly finds himself caught between the Corporation that runs the city and the monstrous, genetically-engineered biker thugs known as the Dogs.

The cover, pictured, was done by artist Lysandra Silber.