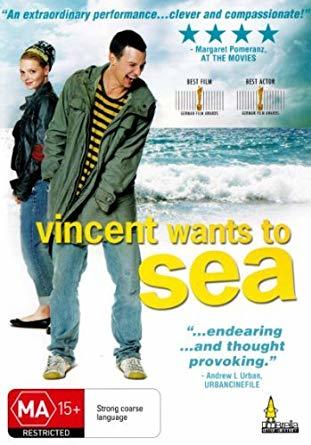 Vincent Wants to See (Vincent will Meer in the original German - it's a similar pun) is a 2010 German drama film about a young man with Tourette's syndrome. After his mother dies, his politician father institutionalizes him. Along with his new friend Marie (who's anorexic) and his roommate Alexander (who has OCD), he goes off to Italy to fulfill his mother's wish that her ashes be put into the ocean where she honeymooned with Vincent's father. Since they're doing this in a car stolen from one of the therapists who works at the institution, they're pursued by the owner of the car (Dr. Rose) and Vincent's father.

It received an American adaptation in 2014 as The Road Within.