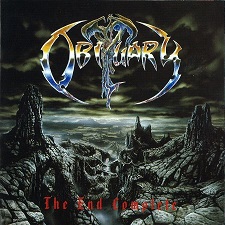 An obituary is something you write about dead people in the newspaper....

Obituary is a Death Metal band from Tampa, Florida. The band is considered one of the first true death metal bands, having emerged only a few short years after Possessed, Death, and the like. They were originally named Xecutioner, but changed it for unknown reasons. The band is the 5th best-selling death metal band of all time. They are known for their simplistic yet crushing sound, as well as their vocalist John Tardy's style, which consists of mainly clearer shouts as opposed to their genre's usual death growls. Their debut album, Slowly We Rot, was released in 1989. Their next album, Cause of Death, is considered to be a classic in the death metal genre. Afterwards, the band released three more albums before breaking up in 1997; The End Complete, World Demise, and Back from the Dead. They broke up because they were bored with touring. The band got back together six years later, and released their first album in eight years since their breakup, Frozen in Time, in 2005 to critical acclaim. The album also features one of their best-known songs; the instrumental track 'Redneck Stomp'. Two more albums were made and released by the band since, those two being Xecutioner's Return (a Shout-Out to their original name) and Darkest Day. A ninth album, or fourth since their reunion, was slated for 2012, but a couple years of Development Hell ended up pushing it to 2014. They partnered with Relapse Records to release and promote the album. The album was titled Inked in Blood was released on October 28, 2014. A couple years later, they released a Self-Titled Album, again with Relapse.

In early 2022, they announced that their 11th studio album had been completed and would be released sometime in the near future.