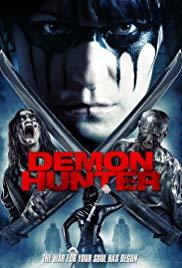 The nightmare we deserve.

Taryn Barker is a woman whose twelve-year-old sister was brutally raped and murdered. When the police did nothing to find the perp, she made a deal with a dark sorcerer to kill him, only to flee when he tried to claim her soul.

She takes up Demon Slaying, but is eventually caught by the detective who failed her so long ago. When the demons capture the detective's daughter, the two have to stop them from killing her.