Manga / Chitose Get You!! 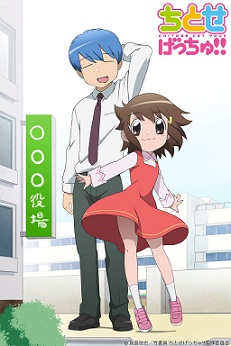 Chitose Sakuraba is an energetic 11-year-old girl, while an older gentleman named Hiroshi Kashiwabara works for the town hall next to the school. Without regard to her surroundings, she rushes to the office to spend all the time with whenever she has free time, causing all sorts of trouble. Chitose, her close friends, homeroom teacher, and even his superiors will get pulled into this slapstick, comedic adventure that you won't want to miss!

Chitose Get You!! is a Yonkoma manga by Etsuya Mashima, which ran in Manga Life Original from 2002 to 2014. An anime adaptation aired in 2012, which is streaming on Crunchyroll

and available to watch worldwide except Japan.