Film / Behind the Mask: The Rise of Leslie Vernon 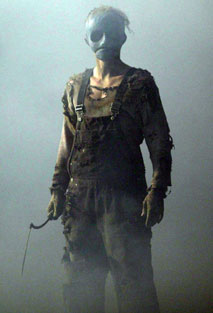 Lace up your boots, kiddies. It's going to get wet.
Advertisement:

Deconstructive Parody, Lampshade Hanging and metahumor are the name of the game in Behind the Mask: The Rise of Leslie Vernon, in which charming psycho killer Vernon brings a film crew along to document the series of murders that will cement his name in the slasher hall of fame along with Jason Voorhees, Freddy Krueger and Michael Myers.

Interviewed by a student journalist named Taylor Gentry, Leslie details the extensive preparations that slashers go through in order to make a killing spree possible, especially setting up his survivor girl: a blonde virgin named Kelly. When it comes time for the actual murders, though, the documentary crew finally realizes what they've gotten themselves into and opt out at the last minute.

Though a Kickstarter campaign was unsuccessful, funding is still being sought for a sequel