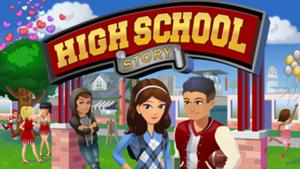 It's the first day...
Advertisement:

is a 2013 Android and iOS game which allows the player to build a high school to attend. It's developed by Pixelberry, the creators of Surviving High School (with which it also shares a universe and several characters). The player creates a student and then helps direct the development of the school by building classrooms, purchasing books, and admitting more students. Quests can be completed to upgrade the school, help out a fellow classmate, or just advance the plot.

At its heart, High School Story is a Breeding Simulation Game that uses the same mechanics as games like Dragon City

or even some aspects of Monster Rancher, though the trappings are different: instead of breeding two creatures to combine their types, two students will throw a party and will meet a new student dependent upon which clique they belong to. Instead of spending a few hours warming the egg in a hatchery, the new student must spend a few hours filling out forms in the admission office.

The game now has a spinoff called Hollywood U where your character there is a student at an acting school, and a Visual Novel Broad Strokes sequel (explained in game as a potential future), High School Story, as part of Pixelberry's Choices collection.