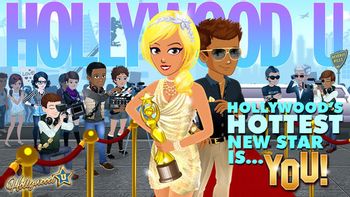 Welcome to Hollywood University!
A 2014 iOS and Android game from Pixelberry Studios, the creators of High School Story.

"Congratulations! You've just been accepted to Hollywood University, the school for stars. Pack your bags, because fame, fortune, and romance await!"

The game has officially stopped updating, though you can still download and play it.