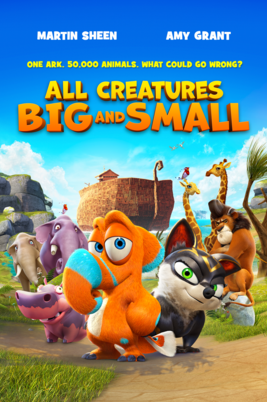 All Creatures Big and Small, also known as Two by Two in the UK and Ooops! Noah is Gone... in the rest of the world, is a 2015 animated film based somewhat off of the story of Noah's Ark.

A great flood is coming, and all the animals are in danger! Thankfully, a nice human named Noah built an ark for them to take shelter in. Finny, who is a fictional species of animal called a Nestrian, is among the animals who go to the Ark, along with Leah, who is a fictional species of vaguely dog-like predator called a Grymp. However, Finny and Leah end up wandering away from the Ark and end up missing it when it sets sail, and Finny's dad and Leah's mom are still in the ark, forcing Finny and Leah to try to get back to the ark, and avoid a pair of griffins who want to eat them, all by themselves. They also meet Obesey, a giant whale, and Stayput, his parasite friend, both of whom join them on their way back to the ark.

Not to be confused with All Creatures Great and Small.

All Creatures Big and Small provides examples of: