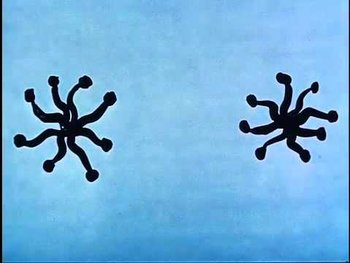 "Is dis da sex life of two things?
"What the hell is dis? Must be a cartoon."
Advertisement:

The Critic is a 1963 animated short film (only four minutes!) directed by Ernest Pintoff, written by and starring Mel Brooks, in his film debut.

Brooks had recently gotten his big break playing a character called "The 2000-Year-Old Man," and in this short plays a very similar cranky old man character.

Not to be confused with the animated TV series of the same title.