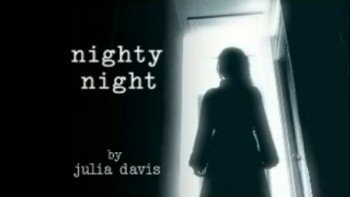 Nighty Night is a British dark comedy sitcom written by and starring Julia Davis. It was first broadcast on 6 January 2004 on BBC Three before moving to BBC2. The show follows narcissistic sociopath Jill Tyrell (Julia Davis) as she learns her husband has cancer and develops an obsession with womanising doctor Don Cole who has a wheelchair bound wife Cath.