Film / I, an Actress 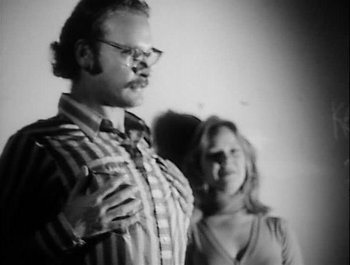 The art of showing off your breasts in film.
Advertisement:

I, an Actress is a 1977 film directed by George Kuchar.

Kuchar was an underground filmmaker who made hundreds of independent short films over a decades-long career. At this time he was teaching at the San Francisco Art Institute. One of his students, Barbara Lapsley, asked Kuchar to give her a screen test which she might use to further her acting career. Kuchar gave her a sampling of ridiculous dialogue and then, over the last ten minutes of an acting class, filmed her. Lapsley attempts to deliver Kuchar's dialogue in a straightforward manner, but the performance gets sillier and sillier as Kuchar keeps urging her to go further and further over the top, continually jumping into the camera's view as he gets more and more hammy.

Compare Hold Me While I'm Naked, a similarly campy Kuchar film from 1965.