Film / Hold Me While I'm Naked 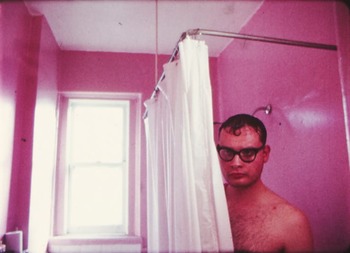 "The mysticism of the stained glass window and the profanity of that brassiere do not go well together."
Advertisement:

Hold Me While I'm Naked is a 1965 short film (15 minutes) directed by George Kuchar.

It is an intentionally campy, over-the-top parody of filmmaking and erotica. Kuchar appears as a film director who is making some sort of exploitation film that involves his actress getting naked in practically every scene. The actress grows tired of this, and proceeds to leave the production. While the actress and her actor co-star run away to have a lot of sex, the pathetic film director tries to find another actress to appear in his film.

Hold Me While I'm Naked is one of the best known works of George Kuchar, an underground, No Budget filmmaker who produced some 200 short films over a nearly 60-year career. Compare I, an Actress, another campy Kuchar short film.