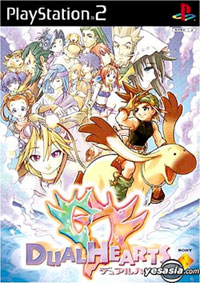 "Eating is my one true destiny." — Tumble

Dual Hearts is a 2002 Action RPG, developed for the PlayStation 2 by Matrix Software.

It just happened that the game was situated around some pretty turbulent circumstances, mostly owing to its rather unfortunate choice of title; the bigger-budgeted and better-hyped blockbuster Kingdom Hearts was released in the same year, along with the cult classic Shadow Hearts. A little lack of creativity that cost dearly, moreso when you realise that the phrase is somewhat word salad-ish anyway.

That being said, Dual Hearts is often considered to be the Spiritual Successor of the original Alundra, revolving around the similar premise of exploring people's dreams (It helps that the developers behind this game are the same developers behind Alundra). Rumble the feisty treasure hunter set out to the tiny isle of Sonno, eager of discovering the fabled relic, the Dream Stone. Meanwhile, Tumble the Baku was sent by the Queen of the Dreamworld to collect the nine keys of the Holy Instruments, in her preparation of repelling a prophesied impending doom. And the story began thusly.

The mechanisms of Dual Hearts might remind people of the Ocarina of Time. Rumble and Tumble dwelt in the peaceful island of Sonno, waiting for people to fall asleep, and dashed into their dream realms, where the battles would occur. It is a well-polished game with gameplay elements that are simple, yet solid; and a light plot, but with quite endearing characters. One of those games without any particularly strong area, but executed beautifully and merits a better score than the sum of its parts.