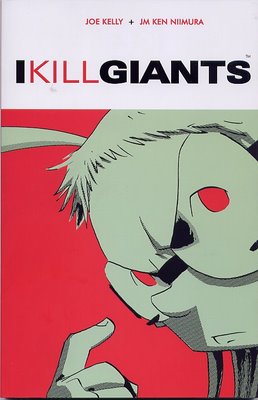 I Kill Giants is a graphic novel written by Joe Kelly (of Deadpool fame) and illustrated by J.M. Ken Niimura.

Barbara Thorson is a loner. A misanthrope. A girl with a very caustic personality. And she's only in the fifth grade. Oh, yes, and she kills giants.

Problem is, nobody else sees what she sees. Everyone treats her as a freak, and she reacts violently to the counselor, Mrs. Molle, when she tries to find out a little more about Barbara. It takes the friendship of a new girl in town, Sophia, to start breaking Barbara out of her shell...

But is that for the best? Are the giants Barbara claims to kill really real? Is Barbara really just suffering from some kind of mental breakdown, caused by some kind of family trauma? And what does baseball have to do with it?

Compare with A Monster Calls, another story about a troubled loner protagonist that gets tied up with a monster that may or may not exist, also accompanied by a similar Bittersweet Ending.

A film version was released in September 2017, starring Madison Wolfe as Barbara and Zoe Saldaña as Mrs. Molle. It was released on streaming platforms in 2018.

Specific to the film