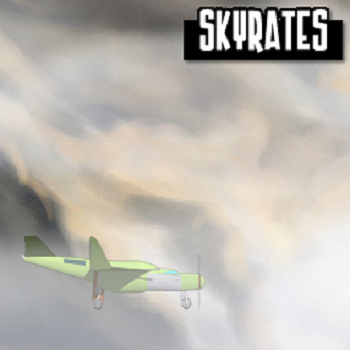 Skyrates is a Flash-based MMORPG set in the world of Skytopia. This world consists of 30 something Skylands which the player fly to and from in search of profit. Although it is a MMORPG, it is unusual in a couple ways. The only way to influence other peoples is economically, depriving them of trade routes and messing up the supply and demand of a specific Skyland. Another difference is the presence of "Sporadic Play" game design. This game design has allows the player to ignore the game at lengths of time, your character following a route that you have planned beforehand. With specific builds of planes, this sporadic play concept can get to almost absurd levels, people having queued up to 1600 hours in a single run.
Advertisement:

The game was first released in 2005, and is still going into 2020, making it a real long-runner in the world of Flash games. It is also notable to having a small, if largely involved Fan community. The developers have utilized the fanbase for the creation of a strong Roleplaying aspect of the game, and the fanbase maintains a wiki and forum.