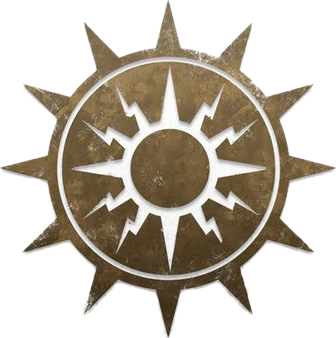 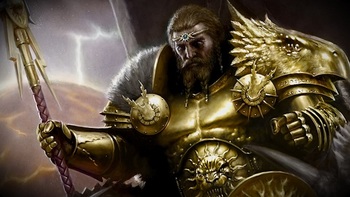 Back to settle the score.
The once mortal founder of the Empire who ascended to godhood, having returned and rebuilt the many Worlds once lost to Chaos. But now, the battle against his eternal foes resumes once more after The End Times.
Dracothion
Dracothion, the Great Drake, that caught the remains of the World-That-Was, named it Mallus, and set it in the firmament.
Tyrion 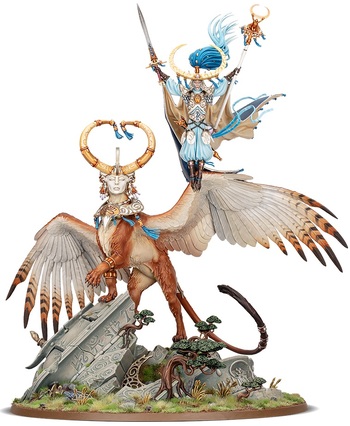 The Mage God & the Spirit of Hysh

The twin brother of Tyrion, the god of light. In the World-That-Was, he was one of the most powerful elven mages to have lived, but a terrible family curse left behind by his ancestor Aenarion made him sickly to the point where he relied on medicinal potions to even stand. Through a mystical bond, he allows the blind Tyrion to see through his eyes.

He is the creator of the Idoneth Deepkin, a monstrous race of aquatic elves whose majority are born without souls. Teclis deeply regrets being involved in their birth. 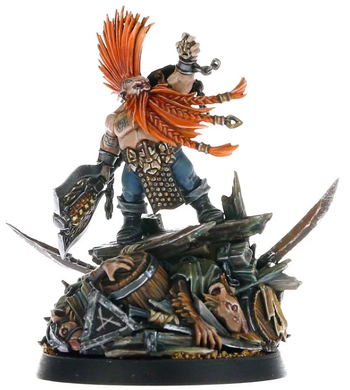 A near peerless monster slayer and a survivor of the world-that-was, Gotrek Gurnisson is a demigod of war that has left a trail of destruction through the enemies of Order while searching for his old axe and his lost companion.

NOTE: This entry is for Gotrek’s appearance in the Tabletop Games. Tropes relating to events in his novel series should go on those pages. 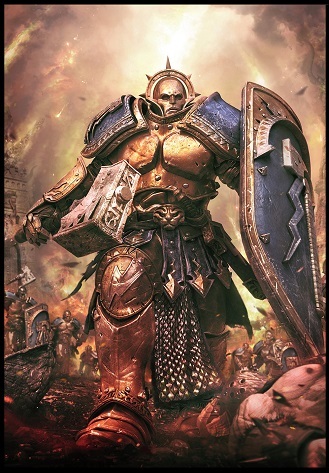 A golden soldier for a golden God.
"This night, we ride the storm!"
—Lord-Celestant Vandus Hammerhand, of the Hammers of Sigmar

The Stormcast Eternals are Sigmar's greatest weapon in his war of reconquest against the dominion of the nigh-omnipotent Powers of Chaos. They are the reforged spirits of fallen tribesmen and warriors of the Mortal Realms, snatched from death at the axes of Chaos at the last moment by Sigmar's intervention. Girded in armour of purest Sigmarite - the last remnants of Mallus, the World-That-Was, long since slain by the Forces of Chaos - and wielding mighty hammers and blades forged by the Priest-Smiths of Azyrheim, they stand ready to strike out against the very legions of hell itself and to bring the light of a new age upon the Mortal Realms.

The Stormcast Eternals are divided into various Stormhosts, self-contained armies that each perform their God-King's bidding, and who are each renowned for myriad heroic deeds. Amongst these Stormhosts are - the Hammers of Sigmar, the Anvils of Heldenhammer, the Astral Templars and the Celestial Vindicators.

Celestant-Prime, The Avenging Angel of Azyr. The Bearer of the World-Hammer. The First Scion of Sigmar. 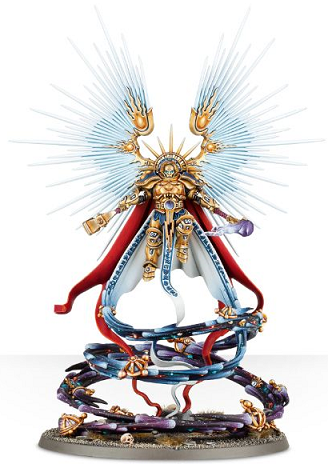 The first of the Stormcast Eternals, the Celestant Prime was formerly a great king from a darkening age, a guardian of mankind chosen by Sigmar himself to be the first of his new army in the war against Chaos. Wielding the Cometstrike Sceptre and Ghal Maraz, the hammer of Sigmar itself, the Celestant Prime is the god's will incarnate, and a terrifying force to behold on the battlefield. 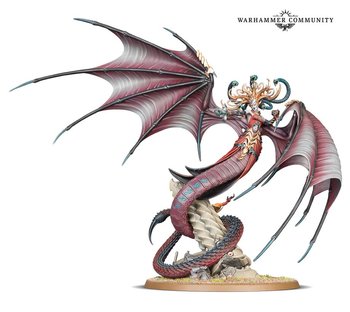 Too long have I been shunned, no longer will I be denied!

The Deepkin are a race of aquatic aelves who live deep below the seas of the Mortal Realms. They were created from the souls of those aelves who were devoured by Slaanesh during the End of Times, and then rescued by the forces of Teclis, Tyrion, and Malerion.

Teclis molded these aelven souls into the Cythai and taught them magic, intending to recreate the High Elven empires that existed in the World-That-Was. However, having been cursed to be born without souls, the Cythai rebelled against Teclis, and fled to the seas when he tried discovering their true nature. There, they renamed themselves as Idoneth - meaning "seclusive".

The Deepkin are defined by a hierarchy based on which of them had souls - those born with souls occupy the higher parts of society as the Akhelian warrior-kings, and the magically-inclined Isharann. These two castes are the leaders of Deepkin society and share a symbiotic relationship as either one couldn't work without the other's skills. The large majority are the Namarti, bald, eyeless aelves born without souls. These aelves conduct raids on settlements to gain souls for themselves, leaving nothing behind.

The old god of the sea worshipped by the elves of the World-that-Was, Mathlann is long dead by the time of the Age of Sigmar — like the rest of the elven pantheon, he was destroyed by Slaanesh during the End Times. He's nonetheless widely worshipped by the Idoneth, who were formed from the souls of his old worshippers and can summon echoes of his power to aid them in battle.

The High King of the Idoneth Deepkin. He is one of the original Cythai who were created from the aelven souls rescued from Slaanesh's stomach. Though time and wars had whittled away at the Cythai's numbers, only he remained. 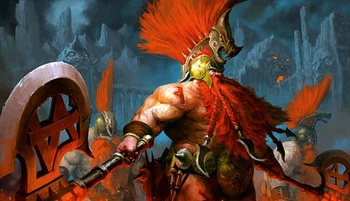 There are grudges to settle and gold to gather!
With each strike of the hammer,
You are tested with pain,
The runes shall ignite your rage,
And fury shall be your armour."
—Hammerchant of Runemaster Althar

A duardin culture that originally arose in the Salamander's Spine mountain range of Aqshy, the Real of Fire, during the Age of Myth, the Fyreslayers are a fierce, warrior race that regularly higher themselves out as mercenaries willing to fight for almost anyone for the right price. Worshipers of Grimnir, the lost duardin god of war and vengeance, the Fyreslayers are driven to seek out ur-gold, a mystical substance containing fragments of their god's divine essence.

Grimnir the Furious, the Burning Berserker 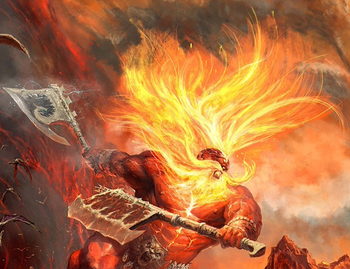 Brother to the duardin creator-god Grungi, Grimnir is the ferocious god of battle and, it is claimed, the literal father of all Fyreslayers. After being rescued from captivity by the Sigmar, the honourable Grimnir set out to pay his debt by slaying the mighty godbeast Vulcatrix, a quest that resulted in the destruction of both mighty beings and the creation of ur-gold.

"Hear me, my scions, and I will tell ye the same as I heard from my own forebear. Only one can bear the lodge's grandaxe. I shall name as heir he whose deeds prove best – he who fells the mightiest foes and brings before the proud name of Vostarg the greatest tribute to Grimnir. May the blaze of battle burn bright within you all".

The stern ruler of the Vostarg Fyreslayers, Bael-Grimnir is widely considered to be the greatest Runefather to lead his Lodge since the legendary Thorgar-Grimnir. Bael has held the position for centuries, siring more than fifty children and leading the warriors of the Vostarg to countless victories. In the wake of the Shyish necroquake, Bael has begun making preparations for a great expedition, with many believing that the mighty Runefather will soon attempt to retake the Vosforge, the ancient home of the Vostarg Lodge, from the forces of Chaos. 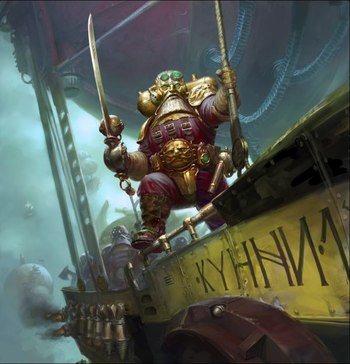 Masters of the skies.

One of several duardin factions, the Kharadron Overlords descend from dwarfs who migrated to the mountains of Chamon, the Realm of Metal, and who escaped the Age of Chaos by first fleeing to the peaks of the mountains and then above them. Using arcane sciences, they learned to siphon "aether-gold", a magical floating metal that normally exists as a gas but which can be processed into a solid with the right treatments, they built enormous flying cities, converting their culture from one that mined the peaks to one that mined the clouds. Out of reach of the vast majority of their enemies, they have prospered, waiting for the proper time to make contact with the other races again.

The Lizardmen of the Old World, having turned into Daemons of Order and come back to resume their eternal war against Chaos and the Skaven.
Tropes
Characters

The native inhabitants of the Realm of Ghyran, the Sylvaneth are the children of Alarielle, the Goddess of Life and Everqueen of the Jade Kingdoms. These otherworldly creatures are great enemies of the forces of Chaos, opposing their perversion of the natural order at every turn.
Tropes 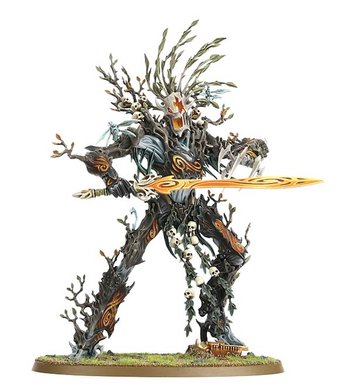 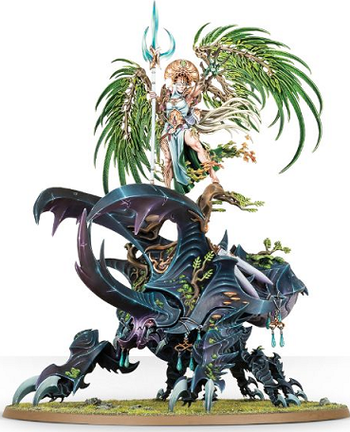 Forget the bugspray or the weedkiller. It's not going to save you.
Before the End Times, Alarielle was the the Everqueen of the High Elves, a beloved and adored leader who also served as the high priestess of the elven mother goddess Isha. Having ascended to Godhood after becoming one with the Wind of Life, she created the Sylvaneth to populate her new realm and became part of Sigmar's pantheon, but continued to pine for the lost World-that-Was. She was forced to return to her realm during the Age of Chaos when the forces of Nurgle attacked Ghyran, and came to resent Sigmar and the other gods for abandoning her land and people to their fate. In the modern day she willingly fights alongside the other forces of Order to repel Chaos, but has no interest in reforming the pantheon or, indeed, in doing much more than focusing on destroying the stranglehold that Nurgle's armies have established in her lands. 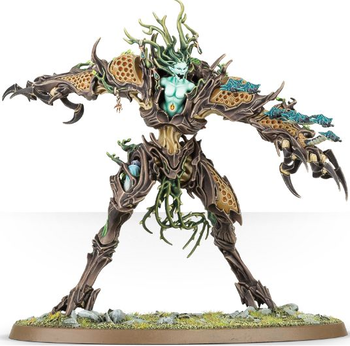 Even her bark bites.