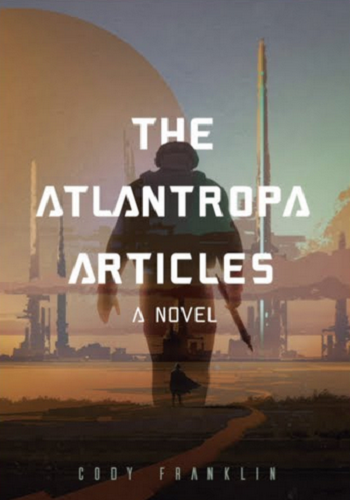 The Atlantropa Articles is a novel written by Cody Franklin. In the 1930’s, architect Herman Sörgel proposes an audacious plan. He wants to drain the Mediterranean Sea by building two of the largest dams ever imagined at both ends of it. The land left behind will become a new continent for Europe, rich in farmland and powered by free hydroelectricity. Sörgel believes Europe can create a modern utopia. He calls this land Atlantropa. Sörgel convinces his homeland of Germany that Lebensraum (living space) is not in Poland but in the untapped lands of Atlantropa. Europe spends decades working together to construct the project, but when the dams are finally finished in the 1980s, something goes terribly wrong. This supposed promised land unravels and chaos erupts.

Thousands of years later, the Mediterranean basin has become a vast desert known as the Kiln, where life is barely possible. Ansel Engel, an Old Reich officer, sails the desert sands supplying Nazi outposts housed in giant structures known as Eagle Nests. Now joined by his younger brother Ulric, an incident with a group of Scavengers (former inhabitants of Southern Europe and North Africa that were forced out of the Reich centuries prior) forces Ansel to contend with the realities of his world, his nation, and the ideology he grew up believing. As he grapples with a history of race, war, politics, and the rifts they cause, discoveries from the past might just lead him to discover something about his world’s future.

The novel was released on October 15th, 2018. Watch the trailer here

. Cody confirmed in December 1st, 2018 that he is working on a sequel for the novel that he plans to release in about a year.