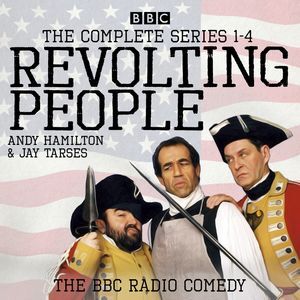 A BBC Radio 4 Brit Com set just prior to the The American Revolution, written by an American (Jay Tarses) and a Brit (Andy Hamilton), who also star as hapless Everyman Sam Oliphant and Deadpan Snarker Sergeant McGurk.

The main character is Sam, a Baltimore shopkeeper who just wants a quiet life, and is resistant to taking either side in the impending conflict. Unfortunately, his younger daughter Mary is secretly the revolutionary pamphleteer Sparticus. Even more unfortunately, two Redcoats have been billeted with them. And just to complicate things further, the redcoat captain and Mary are instantly attracted to each other.

Other problems in Sam's life include his ex-wife, who is now living with another woman; his elder daughter Cora, who is married to a man she (and Sam, and everyone else) loathes; and his son Joshua, who has a habit of wrestling bears to death by accident.

The show ran for four seasons.