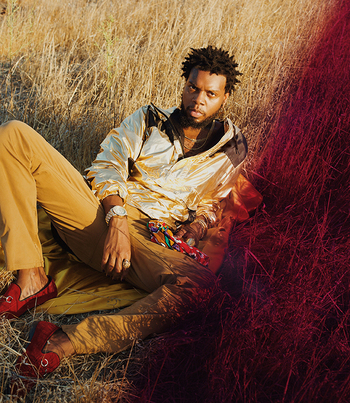 A serpent in the fields
Today I'll find a kind and burrowing creature that can carry these pages into the ground
He'll recite the details of your love with his family
And what was once a whisper will become a deep rumbling sound
— "bless ur heart"
Advertisement:

Serpentwithfeet, moniker of the Baltimore-born Josiah Wise (born July 9, 1988), is an experimental musician based in Brooklyn, New York who became known for his artful blending of gospel with disparate genres such as electronica and classical music.

Moving to New York after initially training to be an opera singer and getting rejected by the conservatories he applied to, he would become apart of Philadelphia's neo soul scene and release his first single "Curiosity of Other Men" in 2014. This would lead up to the release of blisters, which would garner acclaim and recognition from numerous experimental musicians and producers, most notably Björk.

With this Wise began to work on his studio debut with assistance from noted producers such as Clams Casino and Florence + the Machine collaborator Paul Epworth. Inspired by a breakup as well as the power of Wise's own vocal peculiarities, soil arrived in June 2018 garnering accolades for it's gospel-meets-experimental electronic sound.

Tropes present in his work