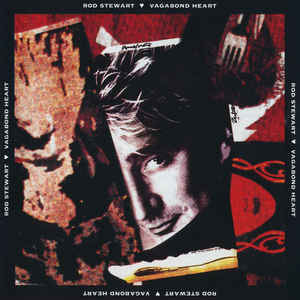 Never will I roam, for I know my place is home
Where the ocean meets the sky, I'll be sailing
Let's dance together just for the night
Let's don't worry about the future or nothing else
'Cause like the music's saying you gotta take chances
Go ahead, just do it and trust yourself

Rod worked for a year on his next album, to build on the momentum build by Out of Order. The keystone here would be a song from his greatest hits compilation Storyteller, a cover of "Downtown Train" by Tom Waits. In addition to the new songs he was writing, he also decided to add a cover of Van Morrison's "Have I Told You Lately".

Though still not perfect, reception to this album was generally more positive than the last. AllMusic describes Vagabond Heart as "more consistent", "more diverse", and generally stronger than Out of Order.

The album spawned six singles: "It Takes Two", "Rhythm of my Heart", "The Motown Song", "Broken Arrow", "Rebel Heart", and "You Are Everything". Three each would be hits in the US and UK; with "Rhythm of My Heart" peaking at #3 on the UK pop chart, and #5 on the Billboard Hot 100. "Downtown Train" was also added to the album; it previously hit #3 on the Billboard Hot 100, and #10 on the UK pop chart. Although not released as a single, his rendition of "This Old Heart of Mine (Is Weak For You)" would see significant radio play.

Still, Rod was noticing that the songs others were writing for him were being received far better than his own work. He would come to the conclusion that songwriting simply wasn't his thing, and would soon stop writing his own work entirely.

"This old heart of mine's been troped a thousand times":