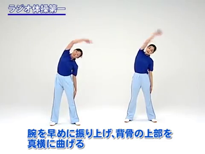 Currently aired by the NHK, Radio Taiso started in 1928, after the coronation of Emperor Hirohito. Originally, it had come from an American series sponsored by the Metropolitan Life Insurance Company. The radio exercises were briefly banned after 1945, deemed to be "too militaristic", but in the 1950s, NHK paired up with the education and health ministries, and the Japanese Gymnastic Association and Japan Recreation Association to create what is now a well known and loved short set of exercises.

Frequently, these exercises are used in schools as warmups, but companies have also been known to include the routine as part of day-to-day working life as a means of building morale and unity.

Naturally, this is reflected in Japanese media.

so that anybody can join in from the comfort of their own home.