Literature / The Mark of the Dragonfly 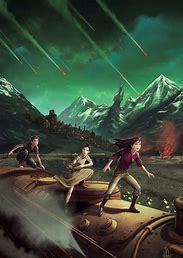 From left to right: Gee, Anna, and Piper
Unwanted things, forgotten things, they all end up in Solace. Unwanted things, forgotten things, they all come home to Solace.
Piper Linny's home is Scrap Town 16 in the world of Solace. During meteor storms, things from other worlds fall from the sky, which scrappers collect and sell. Piper finds an unconscious girl in the meteor fields. She has the Mark of the Dragonfly, meaning she's protected by the king of the Dragonfly Territories himself. So Piper and the girl, Anna, hitch a ride on the 401 train, pretending to be on a mission from the king. Piper hopes to bring Anna back to her home, and get a reward. But a strange man is after Anna, claiming to be her father. This book by Jaleigh Johnson was published in 2012.

The Mark of the Dragonfly contains examples of:

Beneath the surface wound, where deeper layers of skin and tissue should have been, was instead a mass of metal - machine parts, interwoven gears and wires that were more complex than anything she'd ever seen before.