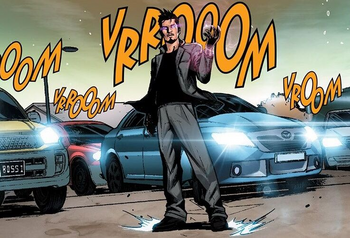 "The form of communication that the brain and this machine use are both electronic signals. If you can't communicate with it, you're not a true man."
— Kogarashi, Kamen no Maid Guy
Advertisement:

A "technopath" is someone who can control machines and bend them to the user's will, either through a physical or mental interface link. In some cases, this power also allows them to "hear" what a machine is "thinking" and establish a direct line of communication with the machine. Might be referred to as "Technomancy".

It's not rare to see technopaths bringing formerly inanimate objects to life (e.g., toasters moving around and firing Projectile Toast at disgruntled users), which is much easier to do if Everything Is Online.