Webcomic / Living with Hipstergirl and Gamergirl 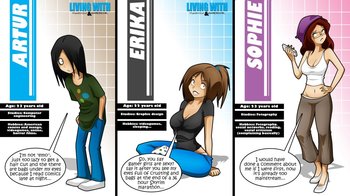 A lucky guy shares apartment with two beautiful girls, each one of them with a singular way of life.
Advertisement:

Living with Hipstergirl and Gamergirl is a comic, written in Spanish and English, that puts its own millennial spin on the old Three's Company formula. Written by Colombian artist Jago (possibly NSFW)

, then usually a few weeks later in English

. (Links should be considered NSFW for occasional toplessness.) Jago also puts strips (and much other material) on his DeviantArt account

Nowaway his strips and NSFW material are published on his Patreon profile.

Previews and spanish version of his strip are still published on DeviantArt, while the English version is published one to two days later on Patreon.