Webcomic / Life of an Aspie 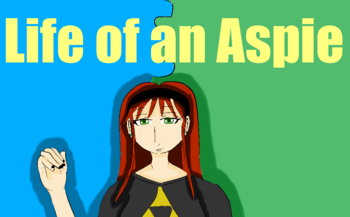 The Aspie in question. In case that wasn't clear.

Life of an Aspie is an ongoing indie shoujo inspired slice of life webcomic updated Mondays, Wednesdays, and Fridays on Tapastic. Created by Tapastic user Aspie Gamer, Life of an Aspie revolves around its main character, Susan Elizabeth Graham, a young American redheaded woman with Asperger Syndrome living in Japan with her grandmother who runs the boarding school she attends, Fukuzawa High.

After being accidentally humiliated by the popular guy just hours after arriving at her now school, Fukuzawa High, Susan decides to take a vow of "chastity" (read: no contact with guys that's anything more than casual everyday conversation period) that will last for the next three years of her education. Being an Aspie however, it's anybody's guess as to how long this will last.

Life of an Aspie can be read here