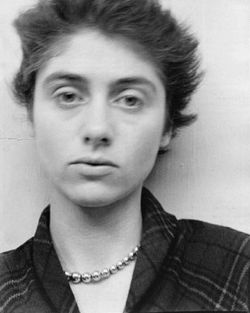 Diane Arbus (March 14, 1923 – July 26, 1971) was a famous American female photographer, best known for her uncompromising black-and-white photographs of eccentrics, the handicapped, sideshow performers or otherwise normal people who just happened to be shot in a particularly disturbing or even creepy way. Arbus started her career as a fashion photographer but gradually devoted her attention to people outside the margins of mainstream society.

Arbus' work has always remained controversial. Some people were scared of her work; others, like Susan Sontag, felt she exploited other people's handicaps and eccentricities for sensationalist ends. Yet, before she took even one snapshot, Arbus always went through great lengths to talk and get to know the people she portrayed and felt that she showed people and things that would never be seen in public otherwise. Her work played with the fear of the unknown and confronted spectators with the fact that their first reaction is usually fear or mockery of the portrayed people. On the other hand, she was increasingly aware that she was being pigeonholed as nothing more than "a photographer of freaks". Her depression finally took over and in 1971, she committed suicide.

Her husband was Allan Arbus, best known as Dr. Sidney Freedman on M*A*S*H, who was also a portrait photographer at the time. Her life story was turned into the fictional biopic Fur: An Imaginary Portrait of Diane Arbus (2006) (for those interested: the film has hardly anything to do with her life).

This artist's work provides examples of the following tropes