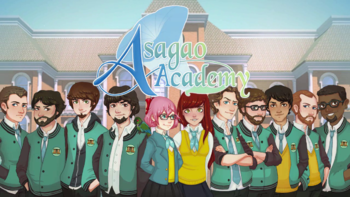 From left to right: Shane, Jirard, PBG, Jon, Hana, Mai, Jared, Nick, Paul, Josh, and Satch.
"Can you win the tournament - and his heart?"
Advertisement:

Asagao Academy: Normal Boots Club is a Ren'Py-based visual novel successfully funded on Kickstarter. The game features characters based on the YouTubers who are part of Normal Boots,

but they aren't romanceable.

When things in her life get to be too much to handle, Hana Mizuno transfers to Asagao Academy to start fresh. Once there, she runs into the Normal Boots Club - a group of handsome, competitive gamers, and the most popular guys in school. And they need her to compete in this year's gaming tournament!

The game was released on April 21st 2016, and is available for download here, on itch.io.