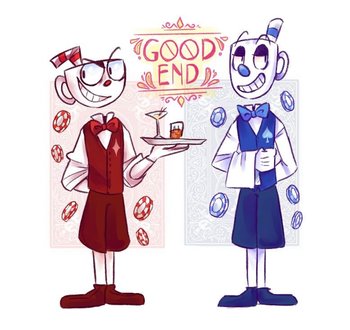 The Tumblr blog, "askcupsandcasinos", better known for the Fan Nickname Casino Cups, is an "Ask Me Anything"-styled blog set in an Alternate Universe of the game, Cuphead. Set roughly a decade after the events of the video game, Cuphead and Mugman, desperately needing money, start working at their former Arch-Enemy, the Devil's, casino. Facing an actively aggressive staff, including the sarcastic and cruel King Dice, the brothers ultimately face far more complications than they ever could have planned for.

Far more inappropriate than the game, the blog is known for its charming Ensemble Cast of anti-heroes, diving deeper into themes and ideas merely hinted at by the source material, it's interesting take on the world of the duo, and sense of humor which mixes the ideas of Sadist Shows, Black Comedy, and Comedic Sociopathy, all while remaining pretty heartwarming and consistently entertaining.