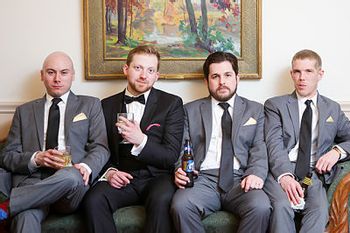 The rippers of bongs themselves.
Bongripper are a four-piece instrumental Stoner/Sludge/Doom Metal band from Chicago, Illinois. Formed in 2005, they have been known for really pushing Doom Metal's extremity and being rather eclectic. While they're primary style is founded in doom metal, they also take after Death Metal, Black Metal, Progressive Metal, Dark Ambient, and Post-Rock.

Along with that, they've always been known for their songs being really freaking long and having a twisted sense of humor such as naming one of their albums Hippie Killer. From making really lame puns ("Reefer Sutherland" and "Great Barrier Reefer" come to mind), and titling some of their works "Sex Tape," "Snuff Film," and "Charlie, Burt Reynolds Has Got Shit On You." They've also gained notoriety for their rather intense live performances, complete with the members going crazy on stage and general awesomeness.