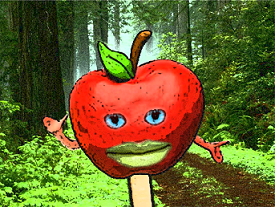 That's natural, children.
"The following are the entries of a blog that is constantly updated. The blog seems to talk about a show called "Happy Appy"."
—The opening sentence of the story.
Advertisement:

Happy Appy is a Creepypasta about a man named Gerasim Yakovlev who discovers a lost Nick Jr. series. At first, it seems normal; Happy Appy is an anthropomorphic apple who goes around healing kids who get injured. After a couple of episodes, it gets progressively worse and worse. The final televised episode that aired has an uncanny resemblance to 9/11 that shows two towers burning up, a plane stuck in one tower, and a kid being crushed by debris. After watching the first 10 episodes, the blogger is stalked by a creature he dubs 'Forenzik' while he continues to delve into and learn the dark truth about the show, its creator, and its possible ties to the thing following him.

Has a character page here, and you can read it here

, which documents on a show oftenly referenced in the pasta, and Forenzik

, which is a biography on Forenzik himself, and also contains the Forenzik Journals, which is so far only on the Happy Appy Wiki. The third sequel, titled Dumb Angel

, takes place months after the original story, where Gerasim encounters Forenzik again. It is best to read Happy Appy first, as these three stories contain spoilers.

This creepypasta provides examples of: