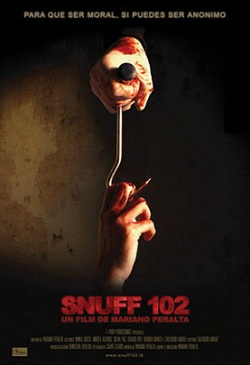 Why be moral, when we can be anonymous?
"Until what point are you willing to watch? In other words, what do you want to watch?"
— The Film Critic

The sadistic abductor has labeled his captives Victim 100, Victim 101, and Victim 102. The journalist is Victim 102, and as her time of reckoning approaches, we are concurrently shown how she got herself into this dire situation. Can she escape, or will she be made into another trophy in this twisted filmmaker's personal collection?

Snuff 102 premiered at the Mar del Plata Film Festival amidst much controversy, with one outraged viewer even going as far as assaulting its creator, Mariano Peralta. It has been called an "artsy" (and some might say pretentious) version of August Underground.

After its initial screenings, DVDs of the film were made available for purchase on the official website, which no longer appears active, making Snuff 102 a bit of a rarity. But then Massacre Video came to the rescue in 2013, re-releasing the film on both DVD and VHS, with lots of new special features.