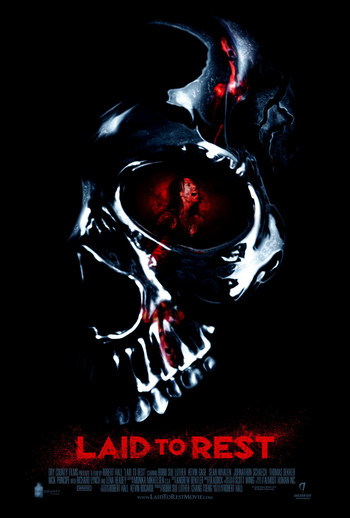 This is the future, everything is chrome.
"Death. Polished"
Advertisement:

Laid to Rest is a 2009 Slasher Movie written and directed by F/X guru Robert Hall.

The plot concerns an amnesiac simply named The Girl, and later, Princess, who awakens in a coffin with a head wound and amnesia. Minutes after she wakes up, she encounters ChromeSkull, a skull-masked psychopath who tapes the murders he commits with his shoulder-mounted video camera. She escapes the killer and is taken in by Tucker, a middle-aged man who lets her stay with him and his wife Cindy, but unfortunately for them, ChromeSkull still wants the girl. After Cindy is killed, Tucker and Princess try to flee, their only aid being a skittish man named Steven. Along the way, the girl tries to remember who she was and why she was brought here, all the while, things go progressively downhill.

A sequel entitled ChromeSkull: Laid to Rest 2 was released Video On Demand before coming out on DVD/Blu-ray September 20th, 2011.