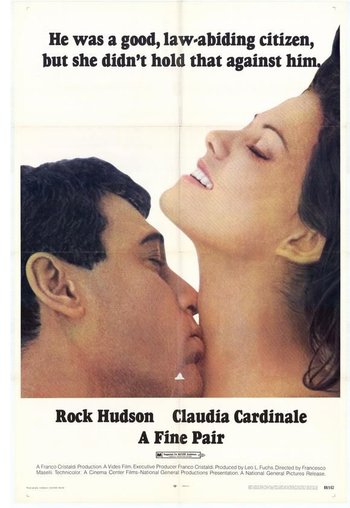 A Fine Pair is a 1968 film from Italy directed by Francesco Maselli, starring Rock Hudson and Claudia Cardinale.

Capt. Mike Harmon (Hudson) is a very buttoned-down, by-the-book NYPD supervisor, with a buttoned-down, by-the-book marriage. Into his life dashes the absurdly gorgeous Esmerelda (Cardinale). Esmerelda is an Italian sexpot who got to know Harmon as a teenager years ago, when Mike worked with her Italian police captain father on an investigation and she developed a schoolgirl crush on him.

Esmerelda has a problem. It seems that she rebelled against her family full of cops and started a life of crime. Together with an experienced thief named Jackie Mitchell, she stole some jewels from a villa in the Austrian Alps. Now Jackie has disappeared, the jewels have been discovered to be fakes, and Esmerelda needs help returning them to the villa before the owners return from a trip. She appeals to her old friend Captain Mike to help her break in and return the fake jewels.

Against his better judgment, and no doubt lured on by Esmerelda's hotness, Mike agrees, and goes with her to Europe. Sparks fly between the two, and Mike comes up with a way to defeat the security system and enter the villa...but Esmerelda knows more than she's telling and there's more than one double-cross to come.

An Italian production released in Italian and English dubs; unlike Once Upon a Time in the West, Cardinale was allowed to deliver the English dialogue in her own voice rather than being dubbed. Ennio Morricone composed the score.