Film / To Sleep with Anger 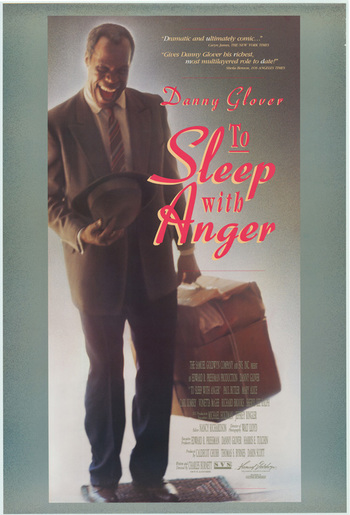 To Sleep with Anger is a 1990 drama film written and directed by Charles Burnett.

Gideon (Paul Butler) and Suzie (Mary Alice) are a married couple and the heads of a black family that lives in South Central Los Angeles. They have two sons, Junior (Carl Lumbly) and Samuel (Richard Brooks), the latter almost always called "Babe Brother". The sons are quite different: Junior is a sober, responsible husband and father while Samuel is thoughtless and self-centered; early in the movie he tells a transparent lie when his father calls him out for missing his mother's birthday.

Into their lives comes Harry (Danny Glover), an old friend of more than thirty years ago of Gideon and Suzie's, back when they were young and growing up in the South. Despite not having seen him in decades, Gideon and Suzie cheerfully welcome Harry into their home and invite Harry the semi-vagabond to stay as long as he likes. However, despite his charming and courteous manner, Harry soon starts to bring stress and disturbance into the lives of the family that took him in.