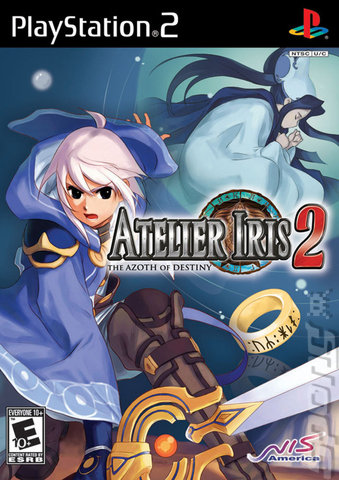 Being a hero makes you go gray early
Atelier Iris 2: The Azoth of Destiny is the second in the Atelier Iris series of Role Playing video games which itself is a subseries of the Atelier alchemy-based RPGs. (Note: "Azoth" is an old alchemical term for mercury, once believed to be a wondrous substance.)
Advertisement:

Despite being a sequel, the game actually takes place several centuries before the first Atelier Iris. It stars a pair of teenage alchemists, Felt and Viese, who, having grown up together, have the old Anime problem of denying their obvious feelings for each other.

When their homeland, Eden (where humans and Mana, the spirits of the Alchemical elements, coexist peacefully) literally starts to vanish, Felt finds himself chosen by the titular Azoth to go to another world to investigate the cause. While separated, the two friends keep in contact thanks to a magical device that allows them to share items (and letters.) Felt discovers that on the other world, Belkhyde, alchemy is a near-forgotten art (and is considered an art used for evil), and an Evil Empire rules. Viese helps mostly by making alchemical items for Felt, though she does have her own adventures on Eden concurrent with Felt's, including investigating a mysterious little girl...