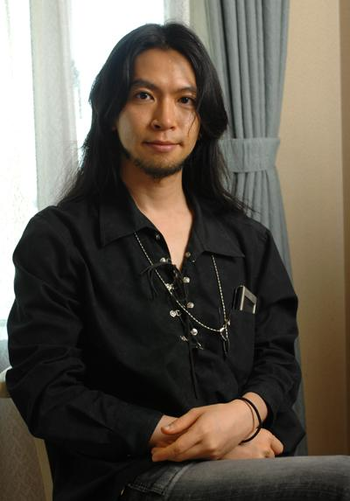 Remember, his albums come with free games.
Daisuke Ishiwatari (born 14 August 1973) is a South African-Japanese game director, writer, illustrator, programmer, designer, musician, king of serving tea, and Mr. Badguy that works for Arc System Works. His artwork is notable for having a very distinctive rough aesthetic, and his music is known for its intricate guitar work.
Advertisement:

His claim to fame is his work on the cult hit Fighting Game series, Guilty Gear, in which he produced the artwork, wrote the story, and provided its godly soundtracks. He was also the first voice of its lead character (and Ishiwatari's Author Avatar), Sol Badguy, after which the role was taken over by Joji Nakata. From the myriad of music references in the series' characters and movesets, it's evident that he is a major rock enthusiast. His favorite band is Queen.

He also provided the soundtrack to Hard Corps: Uprising, and it is still every bit as eargasmic as the aforementioned soundtracks, if not more so.

An often-peddled myth is that he worked for SNK, and was one of the main designers and programmers for The Last Blade series (due to a designer credited as "Daisuke"). However, Ishiwatari-san was already working for Arc System works as a designer on Exector by 1995.

Games Ishiwatari has composed music for: