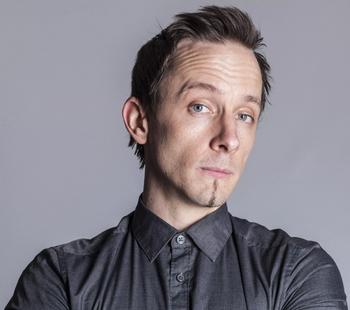 Michael John "Mick" Gordon (born 9 July 1985) is an Australian composer and sound designer. Although he has worked in the games industry for many years, his first widely-recognized success was his work on the Killer Instinct (2013) soundtrack. He later exploded in popularity after doing the music for Doom (2016), which was lauded for its quality and originality. Since then, he has composed music for many video games, most notably the Wolfenstein and Doom series among others. His score for the latter has won several awards, such as the DICE Award for Outstanding Achievement in Original Music Composition, SXSW Gaming Award for Excellence in Musical Score, and the Game Awards Best Music/Sound Design.
Advertisement:

Definitely One of Us, as he occasionally shares memes of some of the games he had composed for, most notably the Doom franchise, and his Twitter bio is literally just the Konami Code.

Gordon has composed music for: