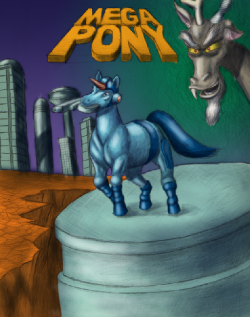 Mega Pony is a fanmade game for the PC created by Khao Mortadios in Game Maker 8. It crosses over Mega Man gameplay and overall style with characters and several other elements from My Little Pony: Friendship Is Magic.

The game has had two different demo releases in 2012 and 2013, labeled as 'episodes'. The final version was released in November 2013. Each new episode contains all content from the previous one, so there's no need to start from an older release.

The story is set sometime around the second season of My Little Pony: Friendship Is Magic after the defeat of Discord, who returns as the main villain. Discord manages to break out of his stone prison, and he captures and hypnotizes the ponies that hold the Elements of Harmony, which are the only artifacts capable of defeating him, and uses them to spread chaos across Equestria. In a desperate attempt to save the land, Princess Celestia builds a powerful fighting robot to regain the elements and put an end to Discord's wily schemes. The robot, of course, is Mega Pony, the playable character in the game, which as the name implies, is a pony version of Mega Man.

The game is also in the style of Mega Man (Classic) games, with a retro 8-bit look matching the NES games, and shares the same gameplay and progression as them, with six 'robot masters' that give you new weapons after being defeated, followed by the final stages in Discord's Fortress.

The official trailer with a download link can be found here.