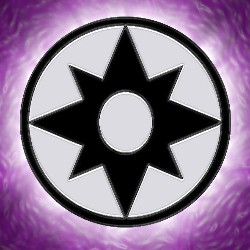 "You have great love in your heart."
Emotion: Love
Leader: Formerly Queen Aga'po (deceased). Currently Carol Ferris
Base of Operations: Zamaron
Entity: Predator
For hearts long lost and full of fright,
For those alone in blackest night,
Accept our ring and join our fight,
Love Conquers All— with violet light!

Before the Guardians became the Guardians, an all-female tribe left, feeling that they shouldn't suppress their emotions. One day on the planet Zamaron, they found a pair of lovers whose love was so great it formed a crystal of pure love around them. They began to use it to form the Star Sapphire with the goal of preserving love. For years, they selected women across the universe and gifted them with the Sapphire, appointing them the Zamaron Queen.

Years later, they realized that placing this potent emotional font in its raw form on the wearer's head left her with no control over her actions. To that end, they refashioned the gems into rings placed on the finger to allow the wearer some emotional distance and control over their actions. In addition to flight, force fields, and energy blasts, the rings are able to sense sources of great love and are informed whenever love is placed in jeopardy. 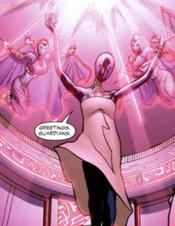 The queen of the Zamarons. Aga'po spearheaded the creation of the Star Sapphire Corps after their use of the sapphire gems proved a failure. She also began the practice of brainwashing captured Sinestros during the War of Light.

After the Predator escaped and the bodies of Khufu and Chay-Ara were taken from the Violet Central Power Battery in Brightest Day, Aga'po used her own personal power to fuel the Star Sapphires' rings, eventually dying from the strain. She named Carol Ferris as her successor. 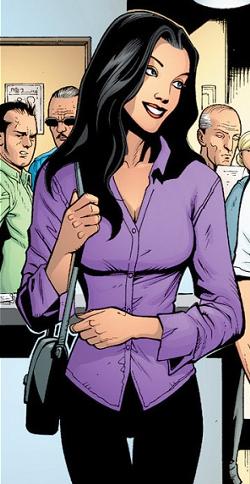 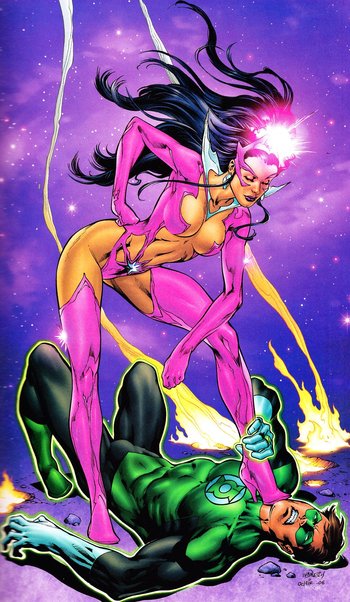 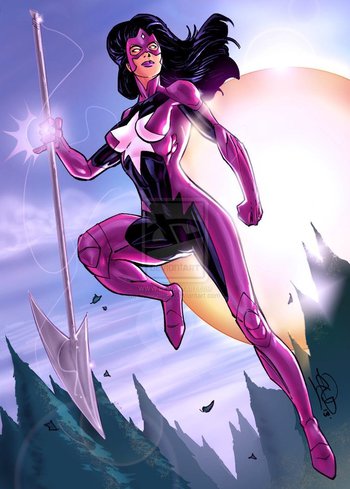 Daughter of the CEO of Ferris Aircraft (and later the CEO herself), Carol found herself attracted to Hal Jordan but she held to her rule of not dating employees. Noticing her Unresolved Sexual Tension, the Zamarons sent her the Star Sapphire gem, creating a Superpowered Evil Side that Hal would occasionally have to fight. She was eventually freed when she got caught in a Love Triangle and the Zamarons made Hal choose a girl — "winner" became the new Star Sapphire (Hal decided to Take a Third Option and chose a Zamaron, forcing them to retreat to deal with it).

With the War of Light looming, the Zamarons have recruited Carol as Star Sapphire once more, only this time as one of many. She agreed in order to help protect Hal. The dying Zamaron Queen was later impressed with how she handled the Predator and appointed Carol her successor.

After the War of The Green Lanterns, Carol refused to remain a member of the Star Sapphires and put her Star Sapphire Power Ring away for safe keeping. Hal, no longer a part of the Green Lantern Corps, tries to rekindle things with Carol after them being at war for so long, though Carol is irritated at Hal's lack of commitment after all these years. However, Hal is soon recruited by Sinestro to liberate Korugar from the Sinestro Corps. When Hal returned to Earth he mentioned that he wanted the last thing to see was her, and Carol decides to give him one more chance. When Sinestro comes again to work with Hal, he refuses. Sinestro, unsatisfied, takes Carol hostage briefly. As Hal and Sinestro clash, Carol puts her Star Sapphire Power Ring back on and once again becomes a member of the Star Sapphires, intending to help Hal. By the time she does so, however, Hal is gone. The Indigo Tribe had teleported Sinestro and Hal across the universe. Thanks to her ring, Carol still knows Jordan's alive, but keeps herself busy helping Kyle Rayner with his team of New Guardians in hopes that she'll be able to rescue Hal with him. 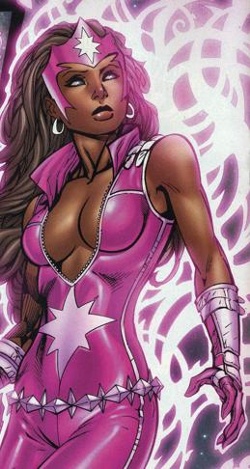 Once a member of Xanshi's ruling family, she was offworld when Green Lantern John Stewart's carelessness led to its destruction. Not knowing exactly who was responsible, she swore vengeance against the Green Lanterns as a whole and targeted Kyle Rayner, the only one left at the time. Some time after learning that John was the one at fault, she joined the Sinestro Corps, only to be captured by the Zamarons and converted into a Star Sapphire.

Upon meeting John and interrupting his battle against Larfleeze by using her newly acquired Star Sapphire Ring, she passionately kisses him, clearly stating that, with the anger in her heart replaced by love, she's now able to let go her survivor's guilt, and forgive John Stewart, as she's now able to see that her former nemesis did everything in his power to try saving her home world. As she returns to Zamaron, she merely asks John to forgive and absolve himself. Currently co-stars with John Stewart in Green Lantern Corps.

She has recently returned to her old self after her kidnapping by the Durlan shapeshifters and the destruction of her ring and has returned to being her old murderous self while swearing eternal vengeance on John Stewart and the Star Sapphire Corps. 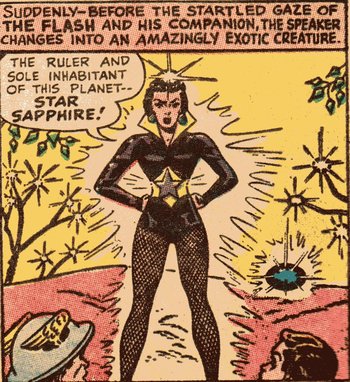 A woman of unknown name from an unknown world, this Star Sapphire was chosen by the Zamarons to be their champion years before the Star Sapphire Corps was formed. She was found unworthy, however, and was banished to the Seventh Dimension. Jay Garrick, The Flash, battled her twice when she escaped. Her connection to later-day Star Sapphires was only made in her third appearance 60 years later.

Miri was on her honeymoon with her beloved Kered when they encountered Mongul II, who wrecked their ship and casually killed Kered. Two days later, she was about to commit suicide in despair when the violet ring appeared and offered her a new purpose saving the love of others. For some unexplained reason, she seems to be in full control of herself (most of the time, anyway).

In Blackest Night, Miri helped resurrect Kyle Rayner by connect Soranik's love to his heart. She and the other Lanterns got pulled to Mogo, due to his "Primary Directive" protocol for the Central Battery.

The Love Entity—the living embodiment of the Violet Light, given life and strength from the love of every sentient being. Its form is that of an alien dragon-like creature.

Back when Star Sapphire was considered merely a Split Personality of Carol's, the Predator was a third personality that emerged when she was "cured" of the Sapphire. The masculine animus to Sapphire's anima, the Predator used the gemstone's energy to exist as a separate being, in the form of Carol's ideal man. He eventually reintegrated with Carol, turning her into Star Sapphire once more.

With the revelation of the emotional spectrum, it is now known that the Predator is not part of Carol's psyche but the embodiment of the Violet Light of love. The Zamarons had it trapped in their Central Battery hoping Carol could tame it, but it was freed when the Black Lanterns invaded. When found again, it was when it possessed a stalker in Las Vegas. Carol managed to calm it, and then convinced the Zamarons to let the Predator remain free. 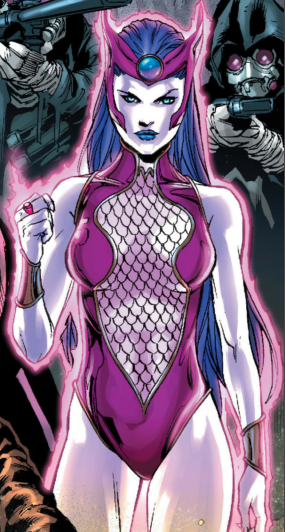 You're in Braid Clann territory, Green Lanterns. You can leave or you can die. What you won't do is impede our livelihood.
Homeworld: Unknown.

The Prixiam (Queen) of the criminal organization known as the Braid Clann, Nol-Anj was arrested by the Green Lanterns and held in a Sciencell on Oa when a Star Sapphire ring found its way to her, drawn by the love Nol-Anj holds for her Clann. Nol-Anj used the ring to escape before immediately rejoining the Braid Clann, and subsequently came into conflict with the Green Lanterns. She eventually returned the Star Sapphire ring in exchange for a promise from Hal Jordan to leave her alone.

The fourth known Star Sapphire to be chosen by the Zamarons, Remoni-Notra took the human identity of Deborah Darnell on Earth to steal Carol Ferris' Star Sapphire gem. She was a long-standing member of the Secret Society of Super-Villains under Darkseid. Unlike Ferris, Darnell was thoroughly evil and took delight in tormenting men. Remoni-Notra was killed by the Spectre as revenge for her sins. 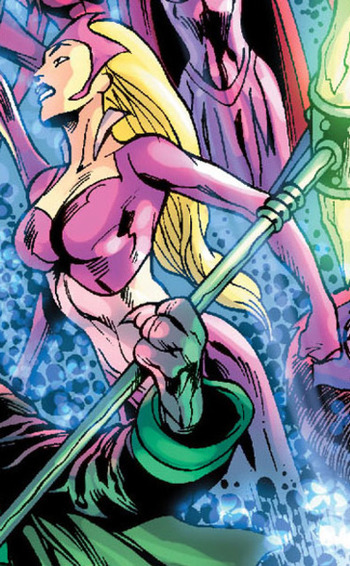 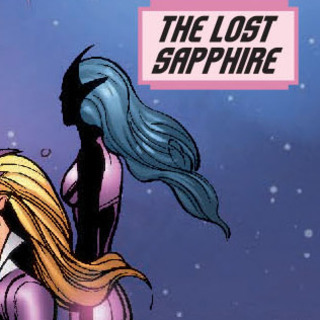 Diana Prince was temporarily deputized during the Blackest Night. 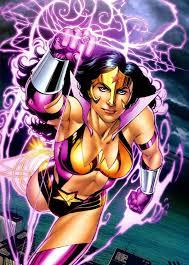