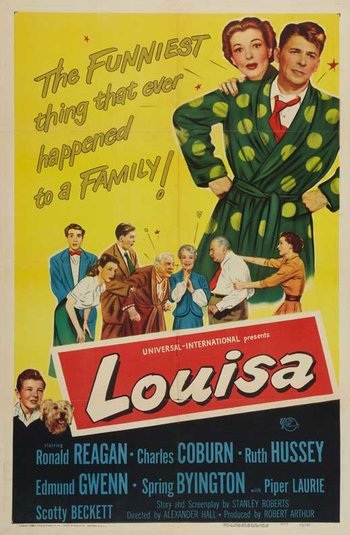 Louisa is a 1950 film directed by Alexander Hall.

This family comedy stars future President of the United States Ronald Reagan as Hal Norton. Hal comes home on the train one evening to find the rest of the family—wife Meg (Ruth Hussey), teenage daughter Cathy (Piper Laurie, in her film debut), and young son Jimmy—all in foul moods. It seems that Hal's mother Louisa (Spring Byington), who has recently moved in with the family, is bossing them all around and irritating them to no end.

Hal steps up to the plate and tells his mom that this is Meg's house and not hers and she's got to let Meg run it. Louisa, who's quite lonely as an elderly widow, decides to force herself to join a sewing circle for old ladies. She never does make it, because on the way, she falls into talking with Henry Hammond, the local grocer (Edmund Gwenn). Henry, like her, is old and alone after his spouse also died years ago.

Soon Louisa and Henry are head over heels in love and talking about marriage. Hal has problems dealing with the prospect of his mother getting married again in her old age. Things get a lot more complicated for everyone when Hal's elderly boss Abel Burnside (Charles Coburn) visits Hal on business and falls for Louisa himself. A senior Love Triangle ensues.