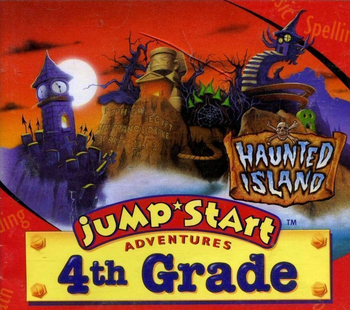 A discontinued, though somewhat infamous, entry in the JumpStart series of Edutainment Games. As its subtitle might suggest, this game is remembered for its Nightmare Fuel, which was presumably a factor in its discontinuation. Three years after its release, it was replaced by a new version, subtitled Sapphire Falls.
Advertisement:

You are a fourth-grade student who has missed one day of school. Not only were you absent, but the teacher was as well. The substitute teacher just happened to be a Wicked Witch named Ms. Grunkle, who turned all your classmates into monsters and imprisoned them on a creepy island where everything looks like it was designed by Tim Burton. So now It's Up to You to rescue them, wandering through the spooky woods of the island to find the Mini Games which provide you with personal belongings of the classmates needed to turn them back to normal. Helping you out is a purple bat named Flap, who plays a similar roll as Botley as your companion, and a fortune teller named Madame Pomreeda, who can turn your classmates back to normal with said personal belongings. Occasionally, an evil ghost named Repsac will pop out of nowhere and force you to answer a question. Answering a question wrong will cost you health points and losing all your health points will land you in the Labyrinth.

Keep in mind that there are two versions of the Haunted Island game, the original 1996 release and an Updated Re-release from 1998. The biggest difference is that the '98 version added an onscreen leveling feature and an in-game map. The '98 version also shortened the gameplay, with you having to play two games per item instead of three.

Can be downloaded from the Internet Archive

. Essentially, it's a Defanged Horrors version of a Survival Horror game. You can see a Walkthrough starting here

and a review noting its scariness here

The game ends with Ms. Grunkle getting away.

The game ends with Ms. Grunkle getting away.