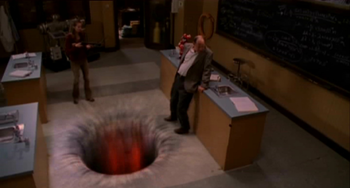 Fred screams in delight to Gunn when she learns that her paper "Super Symmetry and P-dimensional Subspace" has been published in the journal Modern Physics Review with an invitation to speak at the 31st Annual California Physics Institute Symposium by her old college Professor Seidel, and they begin celebrating by making love. Meanwhile, Angel gets nowhere trying to convince Lorne to tell him what his visions about Cordelia were about when he discovers that Connor has been sneaking into the hotel getting Cordelia's personal items and clothes. Cordelia has been decorating Connor's loft with her things and pasting pictures of herself with other people on the wall, trying to remember what is missing in her life. Lilah pays a wary Wesley a surprise visit at his apartment, giving him an antique knight's helmet as a gift and telling him that she has taken the afternoon off, but Wesley tells her that he has to leave. She sees that Wesley has been reading Fred's published article, which sparks her interest.

Fred's talk about her paper at the seminar, which is attended by Angel and Gunn as well as Wesley and Lilah, takes a sudden turn when a dimensional portal opens above her during her speech and snake-like creatures emerge to kill her just as Lilah leaves the conference room. Angel and Gunn run to the stage and save her. Angel confronts Lilah but she denies having anything to do with the attack. Angel soon realizes she was only there because Wesley was, but warns her that he intends to have a conversation about the firm's recent attack (and brain-suck) on Lorne. Angel reconstructs the events in the lobby of the hotel and remembers a man sitting behind them in the auditorium who was taking pictures during the attack on Fred. Angel and Gunn confront the man in a comic book store, who they discover is a fan of Angel in chat rooms on the Internet and wants to be their intern. He tells them that at least three other physics students have disappeared prior to Fred's abduction into the Pylea dimension six years earlier.

While paying Professor Seidel a visit in his laboratory, Fred discovers that Professor Seidel is the one responsible for the attack on her and the one who transported Fred into the Pylea dimension along with some other classmates of hers whom Seidel feared may outshine him someday. Against Angel and Gunn's advice, Fred goes to Wesley's apartment and asks for his help for some mean-spirited revenge against her former mentor. While searching his books for an appropriate punishment, a portal opens in Wesley's living room that almost sucks Fred in. Meanwhile, Cordelia is being taught by Connor how to slay vampires and demons while a possible romance between them blossoms.

Wesley drops off Fred at Professor Seidel's laboratory. Angel, who has arrived there first, confronts Seidel but is attacked by a demon that Seidel conjures up from a book of magic. Seidel attempts to escape but is intercepted by Fred brandishing a cross bow. She opens a portal to a hell dimension, and Seidel desperately holds onto a laboratory counter to avoid being sucked in. Gunn bursts into the room asking her not to do it and that there will be another way. He goes to Seidel and breaks his neck before tossing his body into the portal. When they arrive back at the hotel, Angel notes that both Gunn and Fred are quiet about what happened to Seidel, although he has apparently been told that Siedel simply fell into his own portal rather than knowing the full details about the confrontation. After Gunn and Fred go back to their room, Cordelia arrives and asks Angel if the two of them were in love with each other.